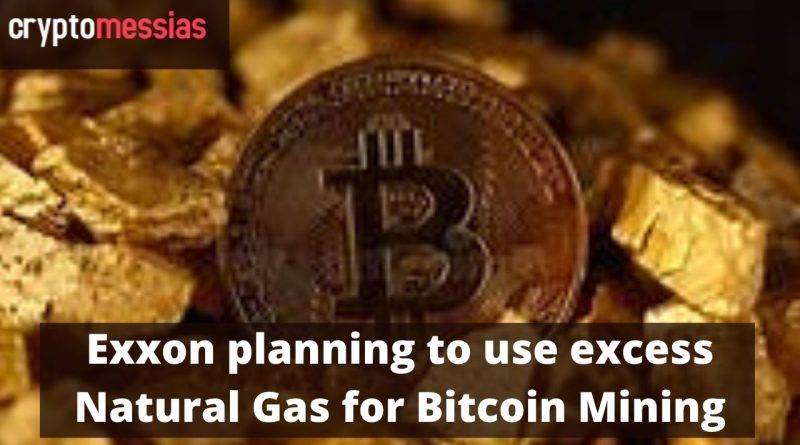 The gas and oil giant has been leveraging Bitcoin mining to decrease its flare gas emission.

A major multinational gas and oil company -Exxon Mobil- is considering leveraging Bitcoin mining to make an even bigger profit from excess oil production. After using 18 million cubic feet of gas per month for this purpose, the company may take its gas-to-Bitcoin test to multiple countries.
A Clever Use for Bitcoin Mining.

As mentioned by Bloomberg, Exxon is presently burning excess natural gas from North Dakota oil wells that would otherwise be burned off, due to pipeline shortage. As part of an agreement with Crusoe Energy Systems, the company takes gas from an oil pad in the Bakken shale basin to power on-site Bitcoin miners.
January 2021 was the month when this project was launched and was further grew in July of that year. Now America’s biggest oil producer is planning to expand operations to Nigeria, Alaska, Argentina, Guyana and Germany.

Exxon spokeswomen Sarah Nordin said that ‘‘we continuously analyze emerging technologies aimed to decrease flaring volumes across our operations.’’ However, she rejects to comment on rumors about the pilot project.

Bitcoin mining has grown into a full-blown industry that is built around Bitcoin’s Proof-of-work mechanism. This mechanism requires that users race to solve highly tough mathematical problems by spending a tremendous amount of computing energy. The first to solve a problem wins the reward attached to bitcoin’s next block which is equal to 6.25 Bitcoin right now.

The industry has helped in providing a profitable use-case for standard energy resources that otherwise can’t find demand such as oil wells without enough pipeline infrastructure. It also helps to decrease the carbon footprint of companies such as Exxon by allowing them to avoid flaring their gas. Actually, the company expects to meet the world Banks’ call for ending flaring by 2030.