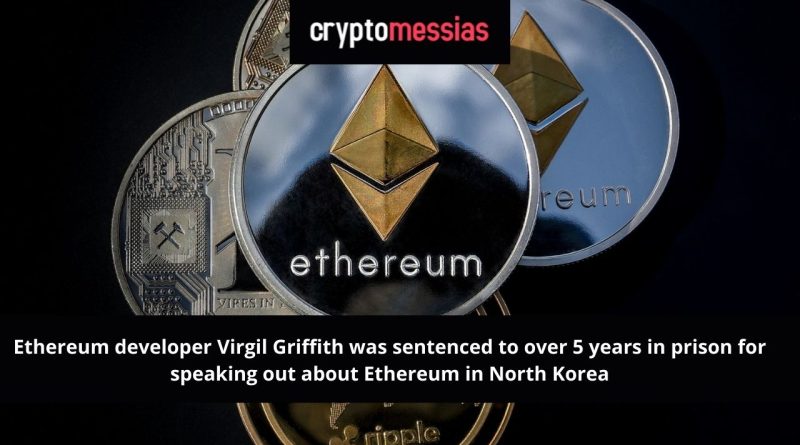 Virgil Griffith got sentenced to 5 years in jail after traveling to North Korea to speak about Ethereum and smart contracts.

on April 12, 2022; Virgil Griffith,  former  Ethereum Foundation developer, was sentenced to more than 5 years in prison for conspiracy after traveling to Pyongyang in 2019 in violation of international sanctions under the International Emergency Economic Powers Law imposed by the  United States government on the  North Korean government.

Griffith pleaded guilty to one single conspiracy charge for delivering a lecture on cryptocurrencies in North Korea, describing the use of Ethereum and the basics of smart contracts.

In addition to serving the 63-month sentence, Griffith must pay a $100,000 fine to the United States government.

Griffith could have faced up to 20 years in jail

Virgil Griffith was arrested in the US in November 2019 after returning from North Korea after his Ethereum conference. He was remanded in custody for about 2 years, 14 months of that on bail, so the rest will be added as he serves time.

Thanks to his request, Griffith’s sentence was reduced from a maximum of 20 years to almost 6 years in prison. In addition, according to A REPORT, the defense called for leniency for the “inhuman” conditions in which the inmate lived by banning him from family visits and forcing him to use his sink as a toilet.

Despite pleading guilty to conspiracy charges, the crypto community and big-name players like Vitalik Buterin showed their support for Griffith, stating that what he stated during the conference was in the public domain and he derived no personal benefit from it Side trip. so he shouldn’t have been convicted of conspiracy.

However, the prosecutor’s office didn’t seem to care. According to Judge Castel, Griffith did not have good intentions and instead showed “a desire to educate people about how to circumvent sanctions.”

Aside from the penalty and fine imposed on the former Ethereum developer, this conviction could serve as an example for anyone trying to use cryptocurrencies to circumvent US sanctions.