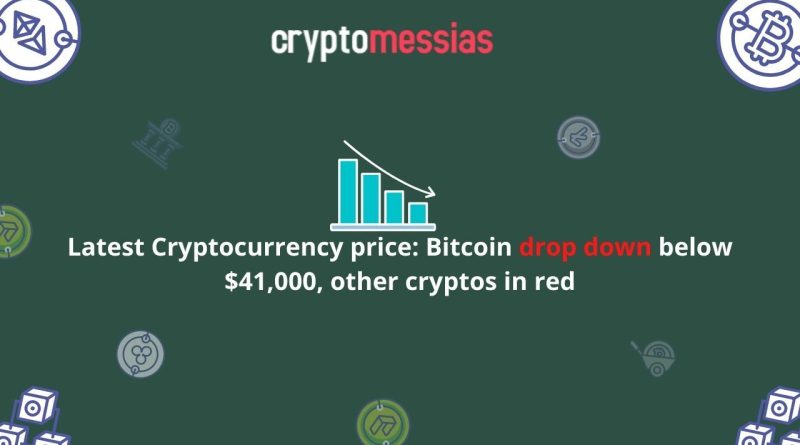 Bitcoin, the largest cryptocurrency by market capitalization continues its four-month-long downtrend and was down by 2.35 percent to $40,892.61.

Bitcoin dropped down below $41,000 and most other cryptocurrencies are also in red. It is mostly due to the war between Ukraine and Russia. Bitcoin the largest cryptocurrency by market capitalization, was below 2.35 percent to $40,892.61.
Ethereum the second-largest cryptocurrency by market cap was below 2.55 percent to $28,46.98.
Other cryptocurrencies like XRP was down by 1.46 percent, Avalanche was 3.77 %, Solana fell 2.90 percent, Cardenon dropdown 2.41%, Polkadot was down by 2.79 percent and Stellar fell by 2.33 %.
Popular altcoin Dogecoin dropdown by 2.04%, Shiba Inu was down by 4.27 percent, Polygon was down by 3.43 percent, Chainlink fell down by 3.03 percent, and Axe Infinity dropdown by 3.89 percent.
Ethereum and Bitcoin dropdown to 2,800 USD and 40,000 USD in the past 24 hours. Other cryptocurrencies are also dropped this weekend. Bitcoin and Ethereum have obtained 7 percent and 12 % in the past week as BTC buyers seem to be active in the market, keeping up the support at 37,000 USD.
This week, we can see an upside momentum in Bitcoin heading towards its resistance zone.ApeCoin has surpassed the market by growing almost 898 percent, while THORChain, Ethereum Classic, Avalanche, Waves, Elrond, Aave gained decent amounts over the past week.